Ace Hardware Corp., a 90-year-old co-op that oversees nearly 5,000 locally owned hardware stores, never would be mistaken for trendy. But its recent growth proves the adage that everything old eventually becomes fashionable again.

“We are a service-based, high-touch, local business,” says John Venhuizen, CEO of the Oak Brook-based chain. “The shop-local trend is one that has served us well.”

So, too, has the small-box movement, in which recession-chastened retailers began shrinking their store footprints. Except for a failed experiment with a few larger locations in the mid-2000s, Ace always has focused on modest stores. Its average footprint is about 8,000 square feet, a mere couple of aisles in a typical 100,000-square-foot Home Depot. A healthier housing market and a slew of American homeowners empowered by low interest rates certainly don’t hurt, either.

Sitting on the sunny side of retail trends helped propel Ace to record profit and sales in 2013. Net income increased almost 28 percent to $104.5 million as revenue rose 8 percent to $4.15 billion.

The home improvement store announced Wednesday that it has built a “holoroom,” which uses 3-D technology and augmented reality to allow users to “walk” through a floor plan of their home (or dream house). In the 20-foot by 20-foot specially designed room, customers can move anything from furniture to toilets and swap out floors and paint colors with the swipe of a finger on an iPad.

By SHELLY BANJO and SERENA NG 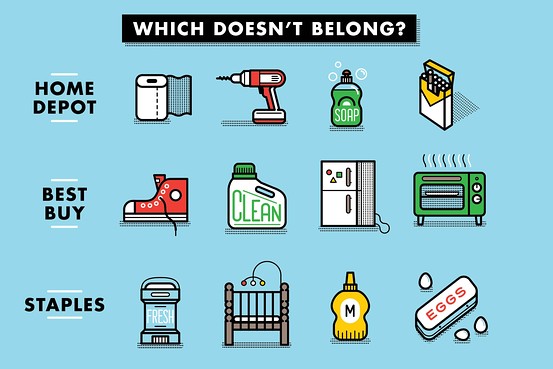 TAKE A QUIZ: Each retailer sells three of the four items shown. Can you pick the item that it does NOT sell? (Scroll down for answers.) Mikey Burton

The 23-year-old often buys books, clothes, shoes and concert tickets online and watches TV shows from Netflix NFLX +0.23% and HBO Go. But she still treks out regularly from her New York City apartment to visit the do-it-yourself store and stock up.

It’s confusing, but it’s no accident. Home Depot Inc. is one of many unlikely retailers betting that consumer staples will boost sales and pull shoppers into their stores. While sales of most electronics and office supplies have rapidly migrated online, sales of soap and paper towels generally haven’t, making them magnets for foot traffic.

“I couldn’t imagine going to Staples for the purpose of buying deodorant, is it really good business?” said Bart Barber, a pastor in Farmersville, Texas, who recently visited a Staples store for computer supplies and was surprised by deodorant sticks near checkout. “I guess it’s for the person who has run out but forgot to go to Wal-MartWMT +0.19% to get it.”

It wasn’t long ago that the largest American retailers had a simple strategy: Choose a category, build lots of huge stores and wipe out less-focused competitors. The lines are starting to blur.

Staples’ marketing executive Alison Corcoran said expanding into deodorants and other goods that have to be replenished regularly is a logical step for the office supply giant. The chain is adding 1,600 new items, mainly business-related supplies, to its stores this year as it tries to reinvent itself and align with changing consumer tastes. 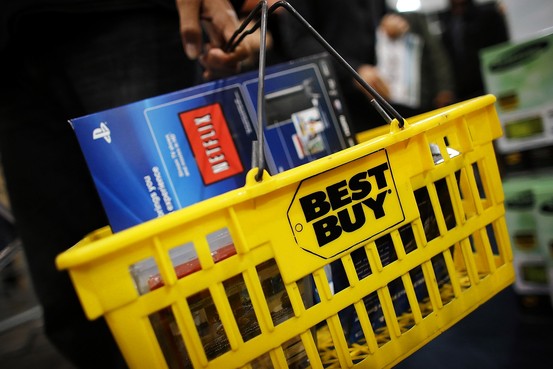 “Some of the new products are traffic drivers, others are a convenience play,” Ms. Corcoran said. “We are trying to establish new patterns with our shoppers, who might be buying those paper towels somewhere else.”

A similar strategy is taking hold at Best Buy, which is trying to use consumables such as Tide, coffee pods and home soda machine supplies to bring back customers who once stopped by every week to buy compact discs, movies and ink cartridges.

Scott Guthrie, who oversees SodaStream International Ltd. SODA +2.03% ‘s operations in the Americas, said nearly one-third of the people who buy soda machines will return to the same store when they need CO2 gas refills or syrup.

Stores “love these planned visits,” because it increases the likelihood shoppers will pick up other items while in the store, he said.

Retailers are facing what may be a permanent drop in traffic as Americans increasingly shop online for everything from diapers to drywall. U.S. shoppers made 3.8% fewer shopping trips in 2013 than they did a year earlier, according to market research firm Nielsen, as strained consumers cut back trips to stores in part to spend less money on gasoline.

Consumer products companies are encouraging the retailers’ moves, saying they have helped boost sales of their brands in an otherwise dour environment. Overall unit sales of consumer products have posted little or no growth in the U.S. for the past three years, according to Nielsen.

Home improvement and office supply retailers have sold consumer packaged goods for some time, but they have been adding more items and marketing them more aggressively in response to growth in the area. Staples this year has ramped up efforts to portray itself as a source of such products, even replacing the bent staple “L” in its logo with items like a broom and dustpan, or a Windex bottle and a sponge. 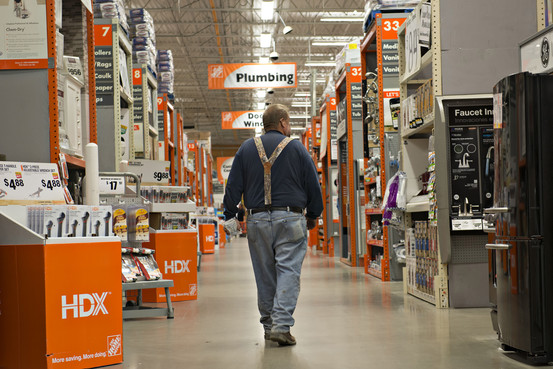 This spring, Home Depot launched its own laundry detergent under its HDX label. Bloomberg

Clorox has also found, for example, when shoppers buy barbecue grills, they also tend to pick up bags of Kingsford charcoal, a product the company makes, or they may buy trash bags along with trash cans.

Employees in the garden department noticed cleaning supplies would boost the division’s sales in the winter, when customers weren’t buying potting soil and shrubbery, and suggested giving them more space. The company worked with Procter & Gamble Co.PG -0.10% to understand how to add cleaning supplies that would appeal to general consumers in addition to its professional customers.

“Once we made it more visible, it became a growing category for us,” Mr. Menear said.

This spring, Home Depot launched its own laundry detergent under its HDX label.

Last year for Christmas, Ms. Monte, the social media marketer, asked her mother for a gift card to the home-improvement retailer.

It isn’t the lumber or drywall she is after. While at the store, she might pick up “some small items, or I’ll have a key made,” she said. But otherwise, “I just go there for toilet paper.”

Amid an uncertain retail environment, warehouse giant Costco posted strong results with 6% growth in comparable sales and 3% rise in net income. While the company’s revenues topped estimates, its earnings per share fell short by a small margin. Costco’s earnings per share came in at $1.07, while analysts wereexpecting the figure to be around $1.09. Unfavorable foreign currency fluctuations had a negative impact of about $0.03 on the retailer’s EPS and 5 percentage points on its international comparable sales growth.

Excluding the impact of currency fluctuations and gasoline price deflation, Costco’s U.S. same-store sales increased by 6% and international same-store sales increased by 8%. Increasing membership signups, rising membership fees and improving renewal rates boosted Costco’s results, and we expect this trend to continue in the future as well. The retailer recently opened its first store in Spain, where it hasinteresting growth opportunities. Costco’s online sales continued to grow at a robust pace in all its markets, which is a promising sign for the company. Overall, Costco appears to be headed towards a bright future.

Our price estimate for Costco stands at $121, implying a premium of less than 5% to the market price. However, we are in the process of updating our model in light of the recent earnings release.

Over the last few years, Costco has seen a noticeable increase in the number of new members. While the retailer added 2.3 million members in fiscal 2009, more than 4 million customers signed up in fiscal 2011. The retailer’s membership base saw a rise of 3 million in fiscal 2012 and another 4.2 million joined Costco in fiscal 2013. Strong membership growth continued in fiscal 2014 as well, which is evident from strong third quarter data. New membership signups increased by 1% during the quarter with the addition of 1.2 million cards. The business member renewal rate improved to 94.4% in Q3 from 94.3% in Q2 and the Gold star renewal rate moved up to 89.7% from 89.6% in the previous quarter. Overall, renewal rate in the U.S. and Canada reached 90.6% from 90.4% (Q2) and in international markets, it soared from 86.8% in Q2 to 87.3% at the end of Q3.

As evident from its robust growth, Costco’s business model appears to be resonating well with international customers. Encouraged by the pleasing customer response, the company has been gradually expanding in key international markets such as the U.K., Mexico and Canada. During the third quarter, Costco opened one store each in Japan and Korea, as well as its first store in Spain. Given the region’s weak economic environment, buyers are likely to welcome a money saving shopping option in the form of Costco. With the right marketing and an optimum emphasis on essentials such as groceries (high demand in Spain), the retailer can acquire a strong customer base. Since Costco has a very small presence in Europe, a successful launch in Spain can facilitate its expansion in a number of markets. Moreover, the company operates just 173 stores in seven countries, out of which 120 are in Canada and Mexico. This presents strong growth opportunities in Japan, Taiwan, Korea, Australia etc.

During the third quarter, Costco’s online business continued to grow at a robust pace backed by its website re-platforming, several new mobile apps, and the launch of new product categories. Following 20% growth during the second quarter of fiscal 2014, the retailer’s e-commerce revenue rose by 15% in Q3 fiscal 2014. We believe that this growth is likely to continue in the future as Costco’s online channel is at a nascent stage and accounts for just 2.5% of its net sales. Furthermore, the company’s e-commerce strategy, increased product categories and better inventory management will assist its online growth. About 80%-90% of products offered on Costco’s website are different from its store inventory. This prevents self-cannibalization between these two channels. Over the last year, Costco has added new product categories such as apparel, health and beauty aid. The retailer has also improved its shipment timings by shipping three depots instead of one. Costco currently operates its e-commerce operations in three international geographies – Canada, the U.K. and Mexico. As the company enters new markets such as Japan, Australia, Korea etc. in the future, its online business will get bigger.