Don’t be fooled by Costco’s tepid sales growth and first quarter profit decline. The company is accelerating expansion and pursuing some intriguing digital partnerships while members continue to renew at record rates.

Costco is planning on a net increase of 32 new warehouses (10 more than last year) during the current fiscal year and 13 of those locations opened during the company’s first quarter ended Nov. 22. Of the 13 new clubs, seven are in the U.S., and of the full year total of 32, 22 will be in the U.S. The company ended the first quarter with 697 clubs, of which 487 are in the U.S., where it enjoys a 91% renewal rate and it executive memberships (those who pay an annual fee of $110) continues to grow.

Orchard Supply Hardware is still marching toward its expansion goal of 100 stores and $1 billion in sales by 2017. And the San Jose, California-based retailer with deep Golden State roots has learned a thing or two during its journey, according to president Bob Tellier.

The 76-store chain is actively upgrading its fleet into a shopper-friendly “neighborhood format” while finding a comfortable home in various urban locations.

In the North Beach neighborhood of San Francisco, Orchard Supply transplanted its 35,000-sq.-ft. store format that — with the help of a catwalk joining two separate buildings — fits into the neighborhood with a full assortment and limited architectural disruption.

That opening followed a new store in Portland, Oregon, built in a former bowling alley, and using remnants from the lanes as store decor that preserves the history of the neighborhood. The company also expanded in La Brea neighborhood of Los Angeles. Jason Ballard remembers the time some guys from Home Depot came poking around in TreeHouse, his eco-conscious home-improvement store in a strip mall in southwest Austin. They were wearing suits and trying to act nonchalant, a ruse undercut by their questions to Ballard’s employees. How much of this does the business keep in inventory? How much of that did it sell last week?

“So I marched up and said, ‘Hey, I’m Jason! How can I help you?'” Ballard recalls. With a little small talk, he got them to say they were in town from Atlanta. Then he asked where they worked. They admitted they’d come from the big-box home-improvement giant. Ballard wished them well and cautioned his employees to say nothing more.

A wafer-thin 33-year-old with a deep East Texas drawl and boyish grin, Ballard doesn’t look like a threat to Home Depot. So far, TreeHouse has only the one location. It is on track to do about $10 million in sales this year, compared with Home Depot’s $83 billion.

But many of the most innovative brands in smart-home technology and sustainable design have embraced TreeHouse in a big way. TreeHouse is reportedly the largest single retailer of Nest products, for instance. It was among the first retail partners and is by far the largest of the much-admired Kentucky company Big Ass Fans. Perhaps most impressive, TreeHouse will be Tesla’s sole retail partner for the launch of that company’s highly anticipated Power Wall home battery. In another indication of its growth aspirations, 99 Cents Only named a former high ranking Kroger executive president and CEO just months after the retailer tapped former Walmart executives to fill the head merchant and CFO roles at the 389-store retailer.

Former Kroger and Procter & Gamble executive Geoffrey Covert, 64, was named president and CEO at 99 Cents Only on Sept. 11, filling a position that had been held on an interim basis the past four months by board chairman Andrew Giancamilli. The day prior to 99 Cent’s Only announcement, Kroger announced a series of personnel moves including the departure of Covert who was stepping down from his role as senior vice president of retail operations after 20 years with the company. Covert had spent 22 years at Procter & Gamble prior to joining Kroger in 1996. In a statement, Kroger Chairiman and CEO Rodney McMullen wished, “him and his family the very best in retirement.”

Less than 24 hours later, in a statement by 99 Cents Only Covert said he was excited to be joining a growing and transforming business.

“I was attracted to 99 Cents Only Stores’ strong fundamental business strategy, longstanding brand loyalty among customers, and its long-term growth potential in the extreme value sector,” Covert said. 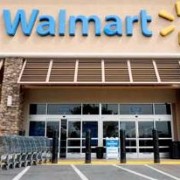 Ongoing operational changes at Wal-Mart could mean more costs for suppliers on top of recently added charges related to the retailer’s efforts to amend its vendor contracts. Walmart U.S. CEO Greg Foran said in Tuesday’s (Aug. 18) earnings release that several changes underway will have a direct impact with suppliers.

Somewhat buried in the release was a statement that involved product features and modular decisions, which are important to suppliers. Foran said Wal-Mart is shifting some of the decisions involving modulars and features back to store operators. Insiders within the local supplier community said there are implications for small and larger product vendors regarding the modular changes.

Large suppliers who in past years have downsized their merchandising staffs could be forced to shift budgets and once again reallocate more resources to the stores. Another alternative would be to outsource the work to one of several merchandising service firms across the country. 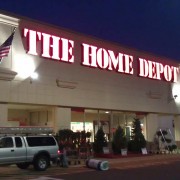 The agreement to acquire Interline was previously announced on July 22, 2015.

“We’re delighted to officially welcome Interline’s associates and customers into The Home Depot family,” said Craig Menear, chairman, CEO and president of The Home Depot. “By joining forces with Interline, we’ll be able to better serve our pro customers whether in- store, online or at their place of business. We look forward to the value this acquisition will bring to our customers and shareholders.” Growth prospects for the food and consumables business at 99 Cents Only just improved considerably following the appointment of a former Walmart EVP of merchandising to a key role.

Jack Sinclair was named chief merchandising officer at 99 Cents Only in a move that signals the retailer’s growth aspirations. Sinclair left Walmart earlier this year as part of larger senior leadership change but not until after he had spent seven years leading Walmart’s U.S. grocery business as executive vice president of merchandising. Prior to Walmart, Sinclair spent 14 years at U.K.-based Safeway holding a variety of merchandising, marketing and operations roles.

“Jack’s significant experience in retail merchandising will be an asset to 99 Cents Only Stores as we continue to improve the execution of our core business plan that emphasizes a strong mix of seasonal, grocery, and close-out products,” Giancamilli said. “His deep knowledge of the grocery and fresh food category will be particularly valuable, given the importance of these categories to our customers and for driving traffic in our stores.” 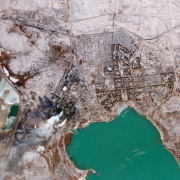 A few years ago, Americans who wanted to invest in China would have a lot of homework — and legwork – -to do. Most would have to hire someone halfway around the world to check out the investment for them. An investigator might drive for hours over the empty plains of Inner Mongolia, China’s far northern region, to make sure a remote mining operation really existed. Others would literally hide in the bushes to count trucks coming and going from a factory, or count the number of trees owned by a lumber operation.

Now, companies have a much simpler solution: monitoring investments across the world through photographs taken from space.

Satellite images contain a wealth of information about how much business a company is doing, and how much a country’s economy is growing. A hedge fund interested in investing in a Chinese miner, for example, might use the satellite images below to see how much the mine is really producing. By watching how a mine changes over hours or days, analysts can figure out how active the mine is.

In the image below, taken by satellites owned by space and analytics company Planet Labs, you can see how a gold mine in northern China changes between September and October. (Move the slider on the image back and forth to see the mine get deeper over the course of the month.)

Analysts are now using satellite imagery to examine everything from the lights cast by cities in India, to black market activity in North Korea, to how many people are shopping at Home Depot. As satellite imagery becomes more available, it will reshape how companies monitor their own and competitors’ operations, and make investors huge amounts of money. It will also generate privacy concerns, as anyone’s activity outside is now visible to the highest bidder.